It occurred to me yesterday that I was all wrong. For years, I have been saying (like many I know, similarly disaffected) that I live my life like I am from another century. That’s not true. I exist in a century that -doesn’t- exist, a made-up amalgam of customs and courtesies and costumes.

I prefer hand-written letters (16-19th), use powder of violets (18th), dress for work in pencil skirts and pumps like a secretary from the 50s (20th), listen to opera from the 19th century and symphonies from the 18th.

I avoid television, write stories longhand, wear ribbons in my hair and fret when people tease me about it. I study etchings and engravings, dream about writing a Paul Helleu catalog raisonne and a book about Austen’s life. At work, there’s a running joke that Anna goes home on Friday night and reads Shakespeare…which is occasionally true.

I am hopelessly sentimental, read poetry aloud, cry unabashedly at movies, wear my heart on my sleeve so any idiot passing by can poke a hole in it. It comes down to a longing for a time that never existed in the first place.

This fairytale of a prettier, gentler time…I blame it on too many Merchant-Ivory films, on too many Austen books, too many Wilde and Coward plays, too many musicals with happy endings…a diet of comedy of manners and soft-spoken romances.

I know very well that if I had been alive at that time (usually the 18th or the 19th century) and privileged, I would be a very different person. Yes, I could sit alone in the elegant splendour of my drawing room. I could spend my days writing letters and playing the piano, sewing (well, maybe not) and spending hours on my toilette to make myself as decorative as possible (in contrast with the days that I wad my hair in a bun).

I could also not vote, not own property, not even necessarily own myself in the sense that I could marry as I please. The corset of my life would tighten around me until I could not even breathe, as the choices dwindled to nothing. The constraint of manners and societal expectations can be a smothering one.

Not that the exact opposite is necessarily desirable. I occasionally refer to ‘basic human courtesy’, which may be a contradiction in itself. Humanity always has its dull, cruel, ugly and disenchanting aspects. Manners are the armor in which each century cloaks itself and our century has shown up like the Emperor without clothes.

The noise, the brutal noise, of everyday life has been hammering at me lately. The jackhammer working on the bridge, the piercing voice of the passing trolley guide, the obnoxious roarings of a cavalcade of motorcycles, the sawing and the shouting. After the leaf blowers and the stentorian church bells and the car alarms, I just want to go in my room and plug my ears with my fingers.

Since I cannot hide, I just have to accept. For now.

I may at some point have to go off where real life cannot find me. You may stumble upon me some day there, tucked in a little cottage in some wild countryside, living out my life in the century that -I- want to be in…with ribbons in my hair. 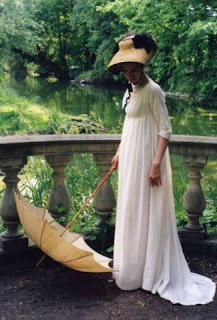 I stumbled upon this jewelry artist at the St. James Art Show

She makes handmade jewelry out of bits of shattered china, vintage postcards, photos and other found antique bobs and bibelots. I love her style. I had to feature this Alice in Wonderland necklace: 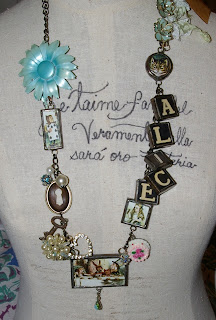 She accepts commissions and you can find her website here: The Charming Cherub