If I had a single flower for every time I think about you, I could walk forever in my garden.  ~Attributed to Claudia Ghandi

This week I had to say goodbye to Persephone, the sweet little cat who had been part of my life for the last three months. Every day when I walked in, she would spring to greet me, jump up on my lap and start making elaborate overtures for my affections.This was new to me, as my prior cat experience had been Ramses, who is so chill he might just as well be asleep, and Pippa, who was half-wild and would snuggle only for thirty seconds before she decided she had better things to do.

Pippa ran away from my last apartment, frightened off by the gang of feral raccoons in our neighborhood. I was devastated and spent weeks wandering downtown before and after work, calling her name, “Pip-pip-pip-pippa”. I plastered her photo on all the telephone poles, in shelters, cried a lot. I finally got a response from a shelter in the north of town; they thought they’d found Pippa.\

I drove up, heart in my mouth, and almost sprinted through the door. They took me through a corridor filled with cages stacked to the ceiling, filled with cats crying. It was like the 7th circle of hell. They brought me to a cage and pulled out Pippa. She leapt into my arms and I was crying and she was crying and the shelter tech was crying.
They asked, “You’re sure it’s her?” I, holding her in my arms as she looked up at me so trustingly, said, “Yes. Yes. Yes.” I signed the papers and took her home.

My first clue that it wasn’t Pippa is that she just loved to sit in my lap. She could sit there for hours and snuggle. But she was the same age and size and the markings were identical…until the day I realized that this cat had the tiniest feather brush of white across her upper lip.

I took her to the vet, got her shots and fixed. I couldn’t just take her back to the shelter, say “Sorry, I was wrong.” I had taken her from the mouth of Hades; I wasn’t taking her back. I named her Persephone, after that other girl who spent some time there.
Persephone was my doppelganger for Pippa. She looked so similar that I had to keep reminding myself that it wasn’t her. I was reminded of stories where fae replaced children in their cradles with a being that looked identical but was not the same. However, she was a wonderful, wonderful cat, as sweet as can be.
Unfortunately, my living situation had changed since I’d had Pippa. We had moved from a charming old carriage house, surrounded by live oaks and plenty of running-wild space, to a brand-new condo townhouse. Cats were allowed, but no yard meant they had to stay indoors. My poor boyfriend has the worst cat allergies I have ever seen, so they had to be confined to our third bedroom.
Ramses was fine with this; he is my sweet lazy lump. Persephone, however, was a baby cat and ready to run and play. She had so much energy that the small space was like a prison. I would go in and play and pet as much as I could, but she knew full well that the whole world was going on outside her door. It tortured me to keep her confined there and so I tried to take her outside periodically, but she always ran back after a few minutes.
Life inside got steadily worse for Persephone. She was irritable and lonely. Where she once only snuggled, now she scratched and chewed. I knew I couldn’t keep her on like this.

Serendipity knocked, in the form of a coworker of mine. Her dog had recently passed away and her young cat was lonely. She had heard about Persephone’s confinement and it had been bothering her. So we talked and she offered and so it was agreed: I was to take my sweet kitty to her new home, the Elysian Fields.

Well, that’s what it sounded like. My coworker lives in a rather rural area, on a large lot. She has magnificent gardens, “Here are the bromeliads and here are the orange trees and here are the azaleas.” So much room for Persephone to romp and play, with her new little friend. Her house is cool and eclectic and there are a dozen-odd places to hide, a window seat to doze…in short, Kitty Heaven.
How could I deny her? All week long, before I took her, I would go in the room and pet her and hug her and think, “This is the last time I am doing this.” The day came and I loaded her in her carrier, tearful all the way down. She was oddly calm on the way down and purred a lot. I like to think that’s because she knew her lot was about to improve dramatically, though that’s doubtless just a fanciful notion on my part.
I got to my coworker’s house and it was everything I could have hoped for the cat I loved and was leaving. I sat there for awhile with her and watched, heart full of bittersweet happiness. She already was happier, bounding here and there and exploring, sniffing everything. She found a new favorite spot, behind the bookcase. One last pet and then I left her there, much happier than when she came.

I know that the parting is not forever. I have been invited to come and see her whenever I like. And I know that Persephone is far, far happier. And, like Demeter, I know I have to let my girl go to wherever her destiny might lead her. 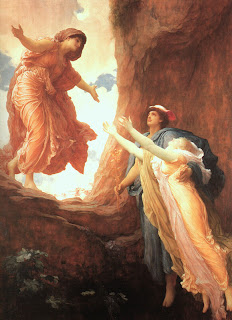 In no fix’d place the happy souls reside. In groves we live, and lie on mossy beds, By crystal streams, that murmur thro’ the meads: But pass yon easy hill, and thence descend; The path conducts you to your journey’s end.” This said, he led them up the mountain’s brow, And shews them all the shining fields below. They wind the hill, and thro’ the blissful meadows go.

This will only make sense to those who are barking mad (‘scuse me, yowling mad) enough to own cat(s). To those people, this will make you laugh very hard.

The rest of the world may wonder how a seemingly domesticated species has trained us to scoop its poop and feed it delicious stinky delicacies twice a day. And yet all we ask is to be lovingly ignored in return.

This is dedicated to Ramses, my reincarnated pharaoh, and Sephi (Persephone). Please don’t gas me again.