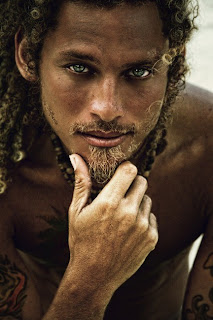 Spellbound was indeed what she was when those eyes met hers. The minute she was caught by them she knew she was his. He didn’t need to lure her back to his lair; she was more than happy when he told her he was going to keep her there forever.

She would sit for hours and wind her fingers in his sundrenched hair while he tapped away on the locks that would bind her to him. She would whisper sweet nothings in his delicate elfish ears and run her fingers along the ornate markings on his deeply tanned skin while he wove the iron strands into place. And she would wait for the moment he would pause in his toil and look at her, making her catch her breath as she lost herself in the starlight glow of his eyes. Then he would smile in his quiet coquettish way, and her heart would flutter.

Despite the sparse furnishings of his beach dwelling cove, he made sure her new home wanted for nothing; providing silk cushions for her to lie upon, and a little tray for her food and drink. Then he hung her up high to give her full view of the ocean and they would watch the sunsets together.

As time went on it was the mornings she looked forward to the most, when he would wake her with his poking fingers and open up the door. She would turn and meet his dreamy gaze wishing once again that she could kiss his perfect lips and feel their fullness. But alas it was never meant to be; she could only dance along his finger and tickle them with her own miniature set, while fluttering her tiny wings against his cheek, and making him laugh.