My friend J. Whitworth Hazzard is running a snazzy 250 word flash fiction contest. It is even sponsored by Big Fish Games. The grand prize is a choice of 3 of their zombie games. You might recall my post touting the virtues of Plants vs. Zombies.

I am a wild fan of flash fiction contests, zombie games, and also my friend J. Whitworth Hazzard (@zombiemechanics on Twitter).

I am well-known for my love of fairy tales. I have never written a zombie-inflected tale before, but I hope you enjoy this one. 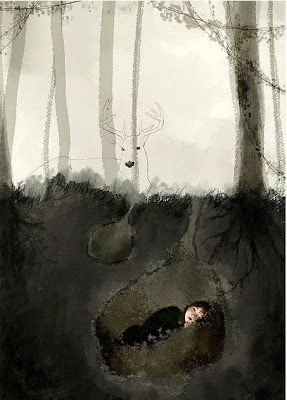 Embry nestled further into her concave of damp earth, rotting leaves crusting off the surface like sad strips of old wallpaper.
First they’d eaten her mother, then her brother. They ate her neighbor, Mr. Sanders, and the boy who brought the newspaper. She didn’t mind that last so much – he’d kicked her shin once.
She’d run for three nights now, but could run no further. So she dug, through black earth oozing with worms and chill decay. She tried to keep her tunnel entrance tiny, packing the dirt in around her, bricking herself up into the darkest place.
“They know we’re in here now, Gus. “
A mahogany curl feathered over her cheek, a slash of red in the dimness. She pillowed her head against a knobby root.
Gus’ nose burrowed into her hand, his tongue giving sandpaper comfort but no warmth.

“I’m glad I’ve got you,” Embry said to the deer, charcoal eyes slitting to tiny half-crescents as they drooped.

Gus started following her on the second day, a silent shadow to her steps. The woods were empty; the birds and squirrels were the first to go.
As it darkened, the embers of her hair muted to faintly glowing ash.
Footsteps shuffled closer, thumping over her pitifully thin layer of dirt. In the world above, they were coming. She was too tired to care.

Everyone needs an imaginary friend at the end of the world.
Wordcount: 249
Art by Barbara Bargiggia

I am so excited because I got to choose this week’s Five Sentence Fiction inspiration word at Lillie McFerrin Writes.

So I picked Yearning. If you weren’t aware, it’s one of my very favorite words and the constant inspiration for this blog. Of course I had to enter!

Despite the fact that I am short on sleep, I scribbled my entry on a tiny square of paper at work, folded it up and smuggled it home to share with you. Be sure to go read the other ‘Yearning’ entries and maybe enter yourself!

He bounded up the wide stone steps two at a time, his heart slamming frantically against the birdcage of his ribs, and flung open her tower chamber door, “Princess!”

The room was strangely still — even the dove loose in the rafters was hushed — and white muslin curtains flapped loose in the breeze. A thick rope was knotted tight round the carved mahogany bedpost; his eye traced it across the floor and over the edge of the window sill.

Her pillow, plumped up on her neatly made bed, had a note pinned to the satin coverlet: ‘I couldn’t wait any more.’

Far below, he heard departing hoof beats and watched as she rode his horse away.