So my lovely friend Holly is running a zombie flash fiction contest on her hilarious blog, Confessions of a Stuffed Olive.

She draws funny cartoons of olives, cats and other creatures. The winner of her contest will get their story illustrated by her.

You may recall the last time I did a zombie-themed story. That little story won the Fan Favorite contest run by J. Whitworth Hazzard.

I swore then that I would not write another zombie tale.

I lied. Not only did I have to write another flash fiction zombie tale, it had to be a funny one. CURSE MY LUCK!

Of course, my sense of humor is a little warped, so you can see the result:

She carefully traced a carmine line around her lips. They weren’t nearly as full as they used to be, so she had to employ all her arts to evoke youthful beauty. A hint of blusher, a quick hairbrush and she was ready to go.

“I, Norma Jean Pintucker, accept the crown of Miss Yuba City; it’s a life-long dream for me. I’d like to thank my agent, Quincy…”

Norma Jean frowned. What –was- her agent’s name? It rhymed with “squirter”, she was fairly sure. Her memory was worsening.

As she drove her 2006 Audi to the Convention Center, she fretted, “Werter. Frankfurter.” She examined her reflection in the rearview mirror, “Ugh, my skin looks so pasty.”

Once she reached the stage door, she patted her hair into place and whispered, “Showtime.”

The crowning ceremony had already started without her. That wasn’t right. She struggled through the heavy velvet curtain, applause ringing in her ears.

“I’m here!” she shouted, pushing some highlighted blonde stranger in a showy dress away from the microphone.

She plucked the tiara from the velvet pillow and stepped into the spotlight.

“I accept the crown of Miss Yuba City today. I’d like to thank my agent, Quincy-“

She was saved from recalling his name by the scream in the audience.

Just then, her lower jaw fell off and clattered to the stage floor.

She gingerly placed the tiara on her head, kicking her jaw into the orchestra pit, “Thank you, ish been a life-long dream.”

It comes time for another #Fanfav contest for the Behind the Curtain flash fiction contest. I can’t help it – they’re so much fun to run and it continues to spread the love. It’s a thrill when people vote for your story and also when you can let someone know that their story moved, scared or intrigued you.

Voting in #FanFav is easy. The #Fanfav contest will be held live on Twitter on Friday, October 19th from 12-8 pm EST. When you have read all the stories, narrow your choices to three favorites (good luck with that – 61 entries!). You can vote two ways.

By tagging it with #Fanfav and @mentioning me, it ensures your vote is counted. Sometimes Tweetdeck eats tweets and I have to go back and hunt around.

2) For this #Fanfav, I am also allowing blog votes if you don’t have a Twitter account. Only ones left from 12-8 pm EST will be counted. 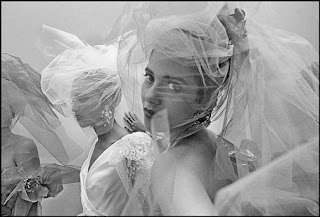 PLEASE NOTE: This #Fanfav vote does NOT pick the winner of the Behind the Curtain contest. Only I pick that and determine prizes. This mini-contest is for fun and bragging rights and the pleasure of knowing you were Twitter’s favorite.

Also, I wanted to share a few more details about the awesome Veil & Subdue libretto from the Dark Veil Package.

My co-creator Paul has been hand-crafting a completely unique libretto – this is the first of its kind. He has embellished the cover and created a one-of-a-kind book with all kinds of magnificent goodies. Here are some teaser photos. 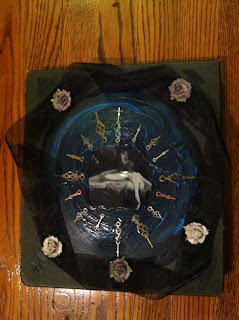 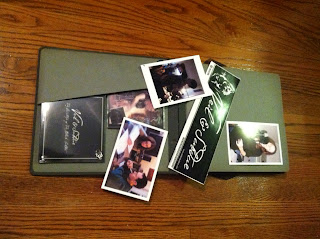 Feel free to ooh and ahh. 😀