This post is the sixth of a new series, highlighting talented people whose work I admire.

Author, The Blood Confession and The King’s Rose
Anna:
Your novels, The Blood Confession and The King’s Rose, are historical fiction; what drew to this genre? In your travels to do historical research, where was your favorite destination? How does being in a place inspire you? What is the most fascinating fact you discovered in your travels by being “on the spot”?
Alisa:
I came to write historical novels by accident. History was a bore to me in school, just a list of nameless dates and facts to memorize. But when I started reading about particular people, it occurred to me that history was filled with characters who were once vital and alive. History is about people—fascinating, flawed, lovestruck, mad people, in many cases.
As for historical research, my husband and I took a trip to England to research Catherine Howard, the fifth wife of King Henry VIII. We visited the Tower of London on February 13th, the anniversary of her execution. I visited her crest on the chapel altar, beneath which she is buried. I felt her presence there more strongly than I had at Hampton Court, where her ghost supposedly still haunts a particular gallery, running and screaming Henry’s name.

It was a bittersweet meeting; Catherine is buried alongside her infamous cousin, Anne Boleyn, who had a half dozen roses on her crest on the day we visited, while Catherine had none. The yeoman guard showed us that the white marble of Anne’s stone has turned pink from so many years of red roses being laid upon it. This made me sad for Catherine, the overlooked (but still doomed) wife of King Henry. I said hello to her and left a stone to mark our visit, and made it clear that we had come a long way to visit her, specifically.

Anna:
On your blog you say you are attracted to “characters who do something wrong.” Which character was a greater challenge for you to write – Katherine Howard or Countess Bathory? Out of all the females in history, what led you to these two as the focus of your novels?


Alisa:
I love this question! Each character posed unique challenges. With Bathory, the challenge was to make her a sympathetic character. That book is more historical fantasy, because I added many fictional elements to her life (this is why I changed her name to Bizecka in the book). I still wanted her to commit the crimes of legend: bathing in the blood of her servants, believing that it would keep her young forever. So, how to make the reader empathize with such a character? How to show her madness growing gradually, in a way that is believable? That was the challenge. I started at a place that I could deeply understand: I gave the young Countess a best friend, and felt her betrayal when that best friend leaves her behind. A very common story, but it alters Erzebet’s perception of her world.

With Catherine Howard, the challenge was perhaps even greater: her sin was stupidity. This is extremely difficult to empathize with, as a reader. What could she have been thinking, cheating on King Henry? Didn’t she know that adultery – or even the intent to commit it – was a crime punishable by death? She surely must have understood this, to some extent; the Tudor court was a dangerous place, ruled by an emotional, unpredictable king. I had to remain true to historical accounts of Catherine while also filling in the gaps to reveal more of her character and create her own “logic” (however illogical) to explain her actions.

Anna:
When writing historical fiction, how do you balance between sharing juicy historical bits with the reader without overburdening the story? Has there been a historical detail in one of your books that you badly wanted to include, but cut for story purposes? Will you stay with the genre of historical fiction or are there other types of writing calling your name?

Alisa:
Oh, so many details! It really was difficult, especially with The King’s Rose. I researched their food, clothing, daily life, holidays, music…The details are valuable for world-building, but it is tricky to include just what you need and not a sentence more. A delicate balance that I’m still learning to strike! I took a break from history and was working on some contemporary stories for the last few years. But there is something exciting about setting a story in a different time period. The beliefs and customs of that time influence the characters and the story itself in very interesting ways. 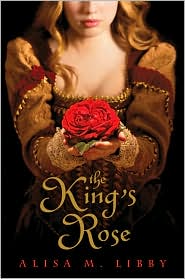 The King’s Rose
Appointed to the queen’s household at the age of fourteen, Catherine Howard is not long at court before she catches the eye of King Henry VIII. The king is as enchanted with Catherine as he is disappointed with his newest wife — the German princess Anne of Cleves. Less than a year from her arrival at court, Catherine becomes the fifth wife of the overwhelmingly powerful, if aging, King of England.

Caught up in a dazzling whirl of elaborate celebrations, rich gowns and royal jewels, young Catherine is dizzied by the absolute power that the king wields over his subjects. But does becoming the king’s wife make her safe above all others, or put her in more danger? Catherine must navigate the conspiracies, the silent enemies, the king’s unpredictable rages, as well as contend with the ghosts of King Henry’s former wives: the abandoned Catherine of Aragon, the tragic Jane Seymour, and her own cousin, the beheaded Anne Boleyn. The more Catherine learns about court, the more she can see the circles of danger constricting around her, the threats ever more dire.

Check out the book trailer for The King’s Rose! http://www.youtube.com/watch?v=pGaAGyAgvas 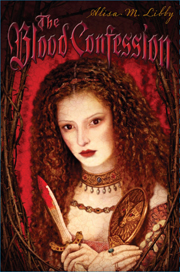 The Blood Confession
Erzebet Bizecka lives in a remote castle in the Carpathian mountains, the only child of the Count and Countess Bizecka. Born under the omen of a falling star, Erzebet is a child of prophecy: the predictions of a scryer tell of a child whose days will end quickly, or whose days will have no end. As a teenager, Erzebet strikes up an unlikely friendship with a young village girl, Marianna, but even her dearest friend can not understand her overwhelming fears of growing older and losing her beauty. The only one who does understand her is Sinestra, the beautiful, mysterious stranger who visits Erzebet and assures her that there are ways to determine her own destiny. With the Biblical passage “The life of the flesh is in the blood” he successfully lures her into a dark world of blood rituals in order to preserve her youth and beauty for eternity. But will the blood treatments—exacted from willing servant girls—be enough to keep her safe forever? How far will Erzebet be willing to go to sever her life from the predestined path God has chosen for her?

Visit the book trailer for The Blood Confession: http://www.youtube.com/watch?v=tYyij1xBLv8