Philippa Gregory possesses the happy talent of weaving historical fact with historical fiction, a true gift. Effortlessly, she takes us through the lives of notable women of history. Sometimes they are famous (Elizabeth I, Anne Boleyn) and sometimes they are obscure. Either way, she treats their lives with compassion, teasing out all the tiny details that make them spring into vivid three-dimensions.

Gregory establishes the benchmark for any historical fiction writer. A historian herself (Ph.D. at the University of Edinburgh), she uses her writing to take her readers into hitherto undiscovered territory. Much historical fiction has been written about the Tudors, but in The Lady of the Rivers, Gregory moves further back, before even the War of the Roses.

The star of The Lady of the Rivers is young Jacquetta (previously encountered in The White Queen). She has visions of the future, a hereditary gift for the women in her family. This gift puts her into the dangerous orbit of the powerful Duke of Bedford. He wishes for her to use her visions to help him discover the Philosopher’s Stone, which allows the transmutation of lead to gold. He wishes to use this gold to strengthen the English army and maintain their hold of occupied France.

Women and power, visible and invisible, is one theme that Gregory revisits in the book. The Wheel of Fortune can throw you very high and cast you very low; to illustrate this, The Lady of the Rivers opens with Jacquetta befriending Joan of Arc, who was imprisoned in her uncle’s home. Because Joan brought the English army to its knees, she must die as a result. As a writer, Gregory is constantly exploring the conflict between men and the women determined to live their own lives.

The novel follows Jacquetta through her life, notably highlighting her influential friendship with Margaret of Anjou that places her squarely in history’s path as the Lancasters and the Yorks begin to clash.

There is a love story with the Duke of Bedford’s squire, Richard Woodville, for those who enjoy their historical fiction with a bit of spice, and there are mystical moments with the gift of foretelling and the goddess of Water, Melusina. In short, all the elements that make Philippa Gregory a giant force in the world of historical fiction.

My one disappointment was that Jacquetta’s life, by necessity of historical fact, was an unending stream of battles. Her husband was constantly being sent off in support of his king. This coming and going occupies a great deal of the book. While Gregory handles this deftly, it allowed my attention to wander periodically. Nevertheless, I am avidly waiting for the next installment in The Cousin’s War series.

Article first published as Book Review: The Lady of the Rivers by Philippa Gregory on Blogcritics.

Anne’s passionate and tumultuous reign managed to immolate just about everything she touched: her brother, her family name, the unfortunates who paid court, and of course herself. Catherine was under water, in way over her head before she even knew it, and was soon washed away for Henry’s final wife, Catherine Parr. Catherine’s greatest crime is that she was young, foolish and in love.

Take a young girl, raised in lax circumstances, and raise her to the highest lady in the land. Then surround her with courtiers and confessors and advisors who would rather see her fall. Add a mercurial, jealous king, old and ailing. Drama, in any setting, let alone the Tudor court where the penalty for refusing the king anything is treason.

Should you be equally enamored with this era, you will be enchanted by Alisa Libby’s novel, The King’s Rose. Written from the point of view of young Catherine, it sweeps you into Catherine’s dizzying ascent through the Tudor court. 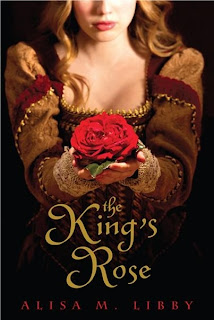 Catherine’s primary assets are her notable beauty and willingness to be dangled in front of the king as a dazzling lure by her family, the Howard clan. She loves the magnificent gowns and jewels: “I am like a dream of me.”

Only later does she realize the true cost of all these luxuries: complete and total compliance to a king old enough to be her grandfather. Libby does a masterful job of portraying the fascinating yet creepy courtship of Catherine by Henry and the willful blindness of the court to the inappropriateness of the match.

Predictably, this glorious wealth’s appeal starts to wane as she is thrown together more often with Thomas Culpepper, a handsome courtier. The pursuit of this love affair, as crazy as it might be, seems all the more inevitable and poignant in the way it is portrayed by Libby.

Through the eyes of Catherine, you see the dread as the coils tighten, you hear the pound of distant drums; she is surrounded by people who know too much of her past, as she walks the steps to the end that history has taken her.

The King’s Rose is quite well-paced and all the little delicious period details are tossed in with effortless flair. One of the greatest challenges of historical fiction is immersing the reader in the era without distracting them with all the things they must learn to understand the people of the time.

Fans of Philippa Gregory and of the Tudor era will devour The King’s Rose. Read more at Alisa’s website.

I have been immersing myself in The Tudors recently, Showtime’s soap opera of Henry VIII. It’s an insanely guilty pleasure, as they conveniently overlook how old and gross Henry was at the time of his last three marriages (Jane Seymour, Catherine Howard, Catherine Parr). It’s one of my favorite time periods of history…to read about, at least. It was a rather tumultuous time to be alive, seeing as you had to be correctly Catholic or Reformer (Protestant) at the right time and also on the king’s good side always.

Sir Thomas Wyatt, poet and courtier, is believed to have a romantic connection to Anne Boleyn; it is unknown as to whether she returned his feelings. It is believed Wyatt wrote this poem after witnessing Anne Boleyn’s execution (May 19, 1536) from the window of his cell while imprisoned in the Tower of London. The third stanza, in my opinion, is as deeply felt and dire a feeling as can be found in English poetry.

Who list his wealth and ease retain,
Himself let him unknown contain.
Press not too fast in at that gate
Where the return stands by disdain,
For sure, circa Regna tonat.

The high mountains are blasted oft
When the low valley is mild and soft.
Fortune with Health stands at debate.
The fall is grievous from aloft.
And sure, circa Regna tonat.

These bloody days have broken my heart.
My lust, my youth did them depart,
And blind desire of estate.
Who hastes to climb seeks to revert.
Of truth, circa Regna tonat.

The bell tower showed me such sight
That in my head sticks day and night.
There did I learn out of a grate,
For all favour, glory, or might,
That yet circa Regna tonat.

By proof, I say, there did I learn:
Wit helpeth not defence too yerne,
Of innocency to plead or prate.
Bear low, therefore, give God the stern,
For sure, circa Regna tonat.

* Circa Regna Tonat – “About the Throne the Thunder Rolls”