This #Faerypin entry created by Eric Martell (@drmagoo on Twitter)

The old stories spoke of endings. It’s all endings or beginnings, he thought. The old stories all began the same way. “A door, a way, a path, and we pass through. But doors open to those on both sides of the wall.” He remembered his favorite story as a child, of the ancient kings, obsessed with obsession, passing through the same door at the same time without seeing each other, so blinded by their desires they were. There was wisdom there, wisdom he wished all shared, and yet few even sought. 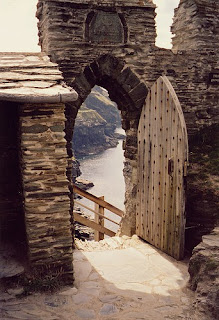 There were some who prayed for endings, he knew. Some who wanted to see what The Enemy looked like, as if it mattered. Fools they were, and more. Whatever hopes they’d had, were frail and tenuous at their best, and now had passed through a door someone who should have known better swung wide.

He knew that the knocks on his own door would come soon. Mothers with babes, young men who had eyed a shop of their own, and the nobles, thinking that hunks of metal and rock, however pretty, mattered at a time like this.

But the shadows outlined the shape of the open door in the courtyard. He wanted to close it, lock it, bar it with stone and steel, but he knew the old stories too well. The Enemy had seen the open door, and knew what it meant, as he did. It knew the magic of the Invitation.

Doors open to those on both sides of the wall, he thought, and knew what he had to do next. Watching the shadows, he stepped through the door at just the right time, and felt the brush of The Enemy as they passed. Behind him, the screams began. And ended.