This entry is by J. Tsuruoka (@jtsuruoka on Twitter) 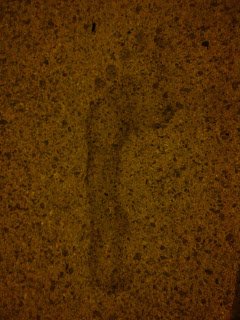 Rog knew about the Barefoot Girl.
Sheer white dress, long red hair, pale skin, bare feet.
Her laughter.
She was city legend, whispered among men of a certain…  persuasion.
“See her and your ass is grass,” an associate said.
“After everything you’ve done you’re scared of a ghost?” he’d asked.
Rog feared no legend.  The city was his territory.
He was out hunting when the Barefoot Girl appeared to him by the fountain in Columbus Circle.
She smiled at him through the watery haze and then laughed and disappeared into the crowd.
Her footprints remained on the sun-warmed pavement just long enough for him to track her.
It was now after dark.  It might even be the next day.
The Barefoot Girl had led him on a chase all over the city.
They were somewhere in the Lower East Side.  Alphabet City, perhaps.  He couldn’t be sure.
She smiled at him from the mouth of an alley.
“Almost time,” she said.
His hunter’s eyes followed her bone-white soles into the darkness of the alley.
He fingered the handle of his knife in but did not draw it.  He never did until it was time to kill.
He put on his most lecherous grin and walked into the alley.
Rog had spent much of his life in the dark but the darkness in that alley was unlike any he’d experienced.
The city’s noise faded and vanished.
Laughter.
Rog spun in the dark.
The lights of a passing car illuminated the alley and in that one second he knew where he was.
That name stenciled on the dumpster.  That broken fire escape.
A very hard, very cold, foot hit him in the gut.
Laughter.
Another kick crushed his jaw.
More laughter.  More blows.
The seventh shattered a knee.  The eighth broke ribs.
Rog slumped to the pavement.
Laughter.  Two pale bare feet, cool against his face.
She reached down and forced him to look, to see his victims- nine women- grinning at him from around the dumpster he left them in.
Laughter.  Darkness.  Then nothing.

She Shall go to the Ball

My sister had glided into the crammed sitting room. It was her Debs. She had looked radiant, no different to every other day; an array of faces was lit up by her conventionally stunning magnificence. 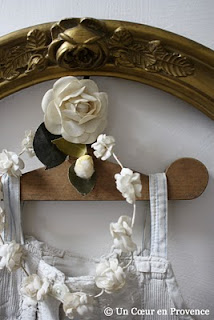 I suppose my inquisitive adventure had started soon after. My seventeen year old self had tried to discover if I held any worth. Everyone admired her, but could I get anyone to notice me? As it turned out everyone noticed me.

My expectant tummy got the attention of all around me and beyond. The catalyst was the waist band of my school kilt as it struggled to wrap itself around the two of us. It was the result of a month of hazy love and the incessant attentiveness of a first boyfriend.

The bright spotlight I had always craved just wasn’t the type I had dreamt of. Afterwards I tried to retrieve the anonymity of the years I had spent in the sisterly shadows.

Lilly was ten months old when my Auntie finally persuaded me that I still deserved to go to my Debs. She had lovingly cradled her second goddaughter, my baby, as she fixed a wisp of my hair that had escaped; her favourite perfume clasped ready to drench me.

My confidence had never really recovered from the vitriolic attention of my peers and their parents. Yet that night I caught a glimpse of a captivating nineteen year old in a purple satin dress. No crowds admired the scene as I opened the door to the boy awkward in his tux. Our eyes met and he looked amazed. Maybe he would be the one.

Today a hundred eyes bore into the flesh exposed by my ivory dress. Their warmth penetrates my every pore and I know it is real. The hateful absence of my parents is drowned out by the approval of my family, old and new. Lilly giggles as I hand the cluster of roses to her and my Aunt steadies my hand. His eyes meet mine once more, we sparkle.

I am a princess. 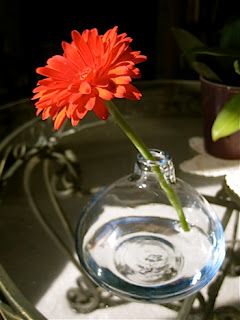