This entry is by Oliver Barton. Contest details found here.
Pink Bells
The pair progress laboriously along the path in the park. He leaning on a stick, each step a pain, she almost bent double, hand in his. She clutches a paper bag. They sit carefully on a bench, very close, avoiding the damper spots. In front of them stretches a sea of pink bells. 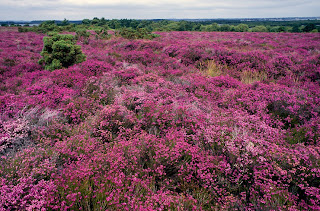 It is nine in the morning, and the bag contains croissants. Gertie hands one to Arthur. They nibble in silence, flakes fluttering like confetti.
While a blackbird sings and sparrows edge towards the crumbs, Gertie extends a bent finger towards a plaque half-submerged in the flowers.

‘What does it say?’ she asks.
‘I don’t know,’ he says, because it is several feet away and his eyes aren’t too good.
With a groan, she gets to her feet and shuffles towards it. Bent as she is, she still can’t make it out. She retrieves a pair of spectacles hanging round her neck, and peers closer.
Arthur hears her saying something, but his hearing is not too good either. He sees her move forward among the flowers. As she does, she shrinks, smaller and smaller, until she vanishes into the pinkness.
Two sparrows squabble over a croissant crumb and fly off, startling Arthur. He struggles to rise. With his stick, he moves the blooms aside so that he can see the plaque clearly. He expects something like the name of the business that has sponsored this bed, but it simply says ‘Come in. Make yourself at home.’
So he steps into the sea of flowers, and at once the pink bells inflate and grow until they are several times his height. The scent is overwhelming, the chime of the bells deep and sonorous. He walks towards Gertie and the others, praying that it doesn’t rain. A raindrop the size of a settee would be unsettling. But, he thinks, they must have ways of dealing with that.

Back on the bench, a little breeze sweeps the paper bag off into a graceful dance, a homage, an obeisance, and all is still.

10 thoughts on “Once Upon a Time Writing Contest: Oliver Barton”