This entry is by Conor A (@ConorDA) on Twitter. Go to Once Upon a Time: Ready Set GO! for further details on entering this contest.

“So, (belch), so that’s it?  Hmmmm?”  Leaning in with intent, Hank stared with one eye wide and protruding, the other in a sort of confused squint, trying to coax a response from Bronson, currently distracted by the nutshells he flicked lethargically across the bar as the days events traced themselves across his vision once more.  Four weeks suspension, with pay for two.  How would he explain this to Rose?  Not that she hadn’t seen it on the news already, or heard about it in texts of hysterics from the other constables’ housewives.
“So we take our eye offa his Lordship Dumpty… for FIVE seconds, and he… he falls on his arse quicker than our Bertha af’er a ni’ on the piss.”  Hank wiped away the excess beer from his face, his words beginning to trail like the stain drawing itself across his sleeve.
“Five seconds”, Bronson echoed.  “How did he not jump that wall? It was two feet, hardly a bloody obelisk now, was it?”
“Obawhu?”
“Nothing”, Bronson sighed. “Finish your pint, bar’s closing”, pointing at the clock.
The innkeeper rang for last orders.  An inebriated smile stretched itself across Hank’s face.
“That’s wha’ I like about you, Bron-boy”, Hank flinging a friendly, albeit sweaty arm, across Bronson’s shoulders. “Ed-ya-cated, never… never shy to face up to anyone.  Eh?  Eh? Inspector King, he near had a heart attack when you tol’ him what happen, haha!  You see the look on ‘is face!?”
“I did, yeah”, replied Bronson, wanting to subdue the show-reel in his head.  A broken ankle.  Fractured wrist.  Fractured cheekbone. Cracked elbow.  What puzzled Bronson was how a man could inflict so much damage on himself from one measly fall.
“Still”, Hank raised a hand, calling for last pint of ale, “boy shoulda kept his glasses on, keep ‘is eyes front.  Lords, eh?  Wassa point?  Fat men with no sense, I say.  (burp) What kinda name is Dumpty, anyhow?”

Bronson remained drooped over his beer, listening wearily to the last few chairs being placed on the tables as the evening drew to a close. 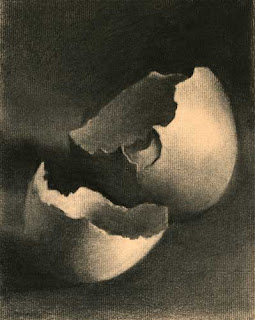 4 thoughts on “Once Upon a Time Writing Contest: Conor A”