From the brain of Mark Wilson (@mors_kajak), our first entry about banjos. Enjoy.

The house was full of dust, but my cough as I entered was exaggerated, an “Anyone there?!” composed of fear. Not reassured, I moved towards the door at the end of the hall.

***
Distance had meant I hadn’t seen my late grandfather for years, although we continued to correspond: “Before you take possession of my house, there is something I must share. You probably don’t remember the pond in the wood that borders my garden…” 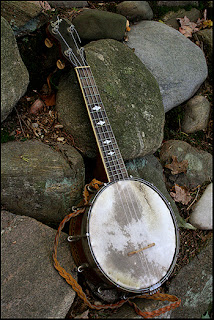 ***
I had been to that pond this morning. The day was still and hot, but the woodland sounds had died into silence by the time I was twenty feet from the water, and the air seem to hum by the time I was within ten feet, which was as close as I dared approach.
***

“I don’t know if I got them all. I learned to reason with them, but they are so very dangerous, and I risked the lives of so many.“

I opened the door to the basement, shivering despite the sweat running off me.

***
“The kappa are so polite, you see, but there were so many, I had to bargain them all into giving a concert…“
***
I descended the stairs, my attempt at a further cough only a quite rasp.

As I entered the basement, I was greeted by a tableau of terror. A dozen of the creatures, frozen in polite rictus, each with one of grandfather’s banjos clutched in dead hands, the rusted capos still clamped round the third fret. Their heads were bowed to the empty chairs, as if still receiving echoes of long-ago applause, the floorboards around their feet stained from where the pond fluid had spilled from their heads.

There was a drip from the ceiling. A scrape on a capo, and the sound of a banjo string snapping…

[1] Desperately contrived and unamusing (except to me) sort-of Latin pun. I expect there are bonus points for that…. 🙂